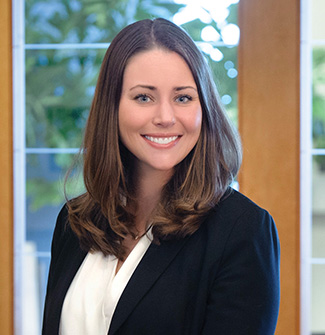 Jessica James, an attorney in the Sacramento office, has experience in defending a broad range of employment issues, including claims of harassment, wrongful discharge, misclassification and systemic discrimination investigations.

Jessica's practice involves employment litigation on a variety of legal issues, including defense of class action and single-plaintiff claims of discrimination, harassment, wrongful termination, misclassification, and other wage-and-hour violations.  She also has experience in defending and advising industry leaders regarding pay equity and compensation analysis in response to civil litigation, OFCCP and EEOC investigations, and other claims of systemic discrimination.

Jessica regularly counsel clients on a variety of employment-related issues, including human resources policies and procedures, separation agreements, employee termination, and compliance with various state and federal regulations, including the Equal Pay Act (EPA), Fair Credit Reporting Act (FCRA), the Worker Adjustment and Retraining Notification Act (WARN).  As part of her counseling role, she frequently conducts training programs for her clients, including trainings on sexual harassment and discrimination prevention.  Jessica also has significant experience conducting internal investigations in response to claims of misconduct.

Prior to joining Orrick, Jessica served for two years as a judicial clerk for the Nevada Supreme Court.  She earned her J.D. from the University of the Pacific, McGeorge School of Law, where she was Editor-in-Chief of the McGeorge Law Review and graduated Order of the Coif.  She also served as a judicial extern for the California Court of Appeal, Third Appellate District.

The EEOC’s revised pay-data collection rule is back in force and the September 30, 2019 deadline is at our doorstep. Here is a quick overview of what employers should know and links to available resources. END_OF_DOCUMENT_TOKEN_TO_BE_REPLACED

For nearly five years, major U.S. corporations have been subject to intense scrutiny over their decisions on whether to release internal pay gap percentages in response to shareholder proposals by Arjuna Capital, LLC and other activist shareholder groups. As these activist groups maintain a keen interest in seeking compensation-related disclosures from industry giants, employers should be mindful of certain issues in considering their response. END_OF_DOCUMENT_TOKEN_TO_BE_REPLACED

For the second month in a row, the Department of Labor’s Office of Federal Contract Compliance Programs (OFCCP) has issued guidance to update materials available to federal contractors and subcontractors. On September 19, 2018, the OFCCP issued two broad directives aimed at improving transparency and communications and to implement the highly-anticipated ombud service. These directives respond to contractor complaints related to the length and process for OFCCP audits. END_OF_DOCUMENT_TOKEN_TO_BE_REPLACED

The California Pay Equity Task Force recently published guidance and approved resources for employer compliance with the state’s equal-pay laws. As we continue to track developments in this arena and await further interpretation from the courts, employers should be aware of this comprehensive and illustrative guidance in reviewing their hiring and compensation practices. END_OF_DOCUMENT_TOKEN_TO_BE_REPLACED

On March 21, 2018, Washington Governor Jay Inslee signed into law amendments to Washington State’s Equal Pay Act, which had not been updated since 1943.  According to the text of the new law, it seeks “to address income disparities, employer discrimination, and retaliation practices, as well as to reflect the equal status of all workers in the State.”   The amendments constitute a significant overhaul to Washington’s equal pay law, and reflect continued momentum among states to provide statutory protections beyond the federal standard. END_OF_DOCUMENT_TOKEN_TO_BE_REPLACED

California continues to pace the nation in terms of equal pay protections, most recently through Governor Jerry Brown’s signing of Assembly Bill 168 on October 12, 2017.  Effective January 1, 2018, California’s new law prohibits employers from asking job candidates about their prior salary, although it allows employers to consider prior salary information if a job candidate voluntarily discloses it.   California’s law further contains an unprecedented provision that requires employers to disclose to job candidates the “pay scale” for the position at issue if the job candidate requests it.  Governor Brown also signed Assembly Bill 46, which clarifies that the state’s equal pay laws apply to both private and public employers. END_OF_DOCUMENT_TOKEN_TO_BE_REPLACED