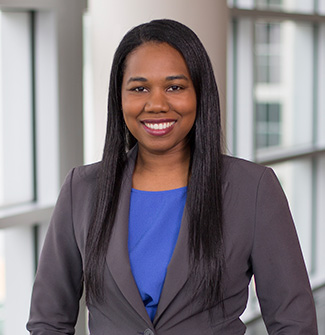 She also maintains a robust employment law counseling practice that includes helping her clients make meaningful and sustainable changes to their approach to diversity.  She skillfully partners with clients to develop or improve their existing diversity, equity, and inclusion programs and policies. A burgeoning thought leader in the space, Tierra has been invited to participate in a number of panels and high-level discussions about representation in the law and technology sectors.

Embodying her drive to find solutions to her clients' legal concerns, Tierra has quickly gained an expertise in advising employers of their rights, duties, and obligations as it pertains to conducting business during and after the global COVID-19 pandemic.

While her practice focuses primarily on the representation of large corporate clients and emerging companies, Tierra also devotes a portion of her practice to providing pro bono services to nonprofit organizations and low income individuals. She also serves in several leadership roles at Orrick, including as a leader of the Black Lawyers of Orrick affinity group and on Orrick's Associates' Committee for the San Francisco office.

Tierra received her J.D. from the University of California, Berkeley, School of Law, where she also earned a Law & Technology Certificate of Specialization as recognition for her extensive coursework in technology law.

A former judicial extern on the Northern District of California, Tierra has experience navigating both the federal and state court systems.

The federal Equal Pay Act (EPA) and its many state analogs require equal pay for equal (or, in some states, “substantially similar”) work.  The EPA contains a so-called “catch-all” defense to equal pay claims, permitting wage differentials if employers can show that they are “based on any factor other than [protected category].”  But this catch-all defense has been under scrutiny in courts and legislatures around the country. As we recently reported, an en banc Ninth Circuit rejected an employer’s argument that sole reliance on prior pay could be a “factor other than sex” within the meaning of the EPA. The Ninth Circuit’s finding is an outlier among circuit courts in this respect, but it fits a broader trend to narrow the “catch-all” affirmative defense, particularly at the state level. END_OF_DOCUMENT_TOKEN_TO_BE_REPLACED

OFCCP has announced the issuance of three new directives intended “to increase accountability and efficiency” and “to maximize the effectiveness of compliance assistance resources.” END_OF_DOCUMENT_TOKEN_TO_BE_REPLACED

For the last two decades, Congressional Democrats have attempted to pass the Paycheck Fairness Act. Beginning with the 105th Congress in 1997-98, several legislators have introduced versions of the act, including then-Senator Hillary Clinton in 2005. Following their newly won majority in the House of Representatives, Democratic lawmakers recently re-introduced the Paycheck Fairness Act on January 30, 2019. The proposed bill, H.R. 7, was introduced by Representative Rosa DeLauro (D) and appears to have considerable Congressional support. Notably, cosponsors of H.R. 7 include every Democratic member of the House of Representatives and forty-five Senators. END_OF_DOCUMENT_TOKEN_TO_BE_REPLACED

On January 1, 2019 at the stroke of midnight, Hawaii joined a growing list of states and municipalities to ban prospective employers from asking applicants about their prior salary history.  As we have previously reported, several other jurisdictions have already passed similar laws that place restrictions on salary history during the application process, including California, New York City, Westchester, and Suffolk County, New York. END_OF_DOCUMENT_TOKEN_TO_BE_REPLACED