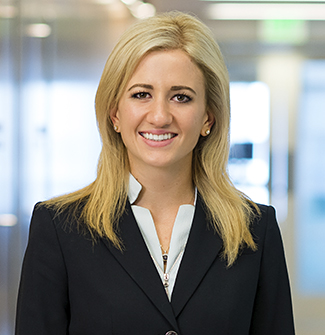 Krystal has experience representing national and international clients from a variety of industries in breach of contract, unfair competition, mass tort, trademark, and trade secret litigation, and has represented banks/financial institutions on a variety of litigation-related issues.  She has worked with companies and individuals as plaintiffs, defendants, and third-parties throughout the litigation process, from providing pre-litigation counseling and investigations, to reaching settlement or preparing for trial.  She has a passion for achieving favorable results for her clients.

Additionally, feeling it important to give back to the community that has made so much possible for her, Krystal devotes time to pro bono efforts involving combating gun violence, preparing criminal expungement paperwork for reformed individuals, helping victims of domestic violence with their initial emergency restraining order applications, and assisting victims of violence and asylees work through the immigration process.  She also co-chairs the diversity and inclusion committee within the Orange County office, is Treasurer of the Orange County Coalition for Diversity in the Law, Inc., is Vice President of the Iranian American Bar Association of Orange County, is a founding board member of the Cornell Law Young Professionals Network, and is an active member of the Federal Bar Association Orange County Young Lawyers Division.  Furthermore, Krystal regularly contributes to various publications, including Orrick’s Trade Secrets Watch blog and the Association of Business Trial Lawyers of OC Report.

During law school, Krystal completed an externship for Honorable Judge Alex Kozinski at the United States Court of Appeals for the 9th Circuit, served as President of the Cornell Law Students Association, was the Senior Cornell Law Library Research Assistant, and received academic awards including the CALI Award in Remedies.

If you have seen any of our prior articles concerning the China Initiative, you know the U.S. Department of Justice (“DOJ”) is still focused on actively investigating individuals with ties to China who are suspected of trade secrets theft.  However, the failure of recent China Initiative prosecutions raises an issue as to which companies involved in academic and scientific research may be targeted going forward.

END_OF_DOCUMENT_TOKEN_TO_BE_REPLACED

As we previously reported, on August 14, 2017, President Trump signed an executive memo asking U.S. Trade Representative Robert Lighthizer to determine whether to launch an investigation into China’s alleged theft of intellectual property under Section 301 of the Trade Act of 1974. Later that week, after a review of Chinese laws, policies, and practices relating to IP, Lighthizer recommended and launched an investigation “to determine whether acts, policies, and practices of the Government of China related to technology transfer, intellectual property, and innovation are unreasonable or discriminatory and burden or restrict U.S. commerce.” END_OF_DOCUMENT_TOKEN_TO_BE_REPLACED