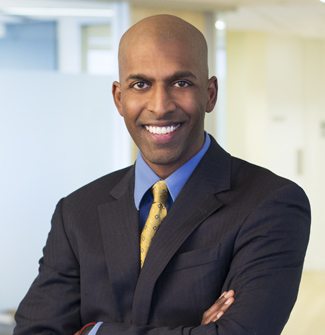 Partner
Seattle
aswaminathan@orrick.com
Read full biography at www.orrick.com
Data is igniting a global, technological revolution. Increased collection, use, storage, and transfer of data has shifted the paradigm of innovation – and created a global security problem. Fortune 500 companies with large quantities of data, cities with vulnerable infrastructure, and every institution in between must manage that risk, without encumbering progress or technological advancement. To do so, they turn to Aravind Swaminathan. Aravind is ranked by Chambers USA and Chambers Global. Clients endorse Aravind, telling Chambers, “he is a strong litigator,” “extremely skilled in the field of legal cybersecurity, extremely responsive and he makes time for us.” “He’s always well prepared and consistently has the answer we need.”

As a strategic cybersecurity advisor, Aravind partners with clients to proactively plan for a crisis and develop strategies to improve resiliency, respond efficiently and effectively, protect their business and brand, and defend them in the onslaught of litigation and enforcement actions that follow. He guides organizations from large public company financial institutions to start-up technology companies to critical infrastructure providers through incidents, and develops business- and brand-centric strategies to mitigate and manage risk. He has directed more than 200 cybersecurity incident and data breach investigations, including enterprise-wide network intrusions to cyberattacks with national security implications.

With extensive trial, litigation and appellate experience, he defends his clients in cyber, privacy, and payments related class actions and other civil litigation (particularly Computer Fraud and Abuse Act matters), and in when these issues lead to regulatory investigations by the SEC, DOJ, FTC, and State Attorneys General.

Aravind’s background as an assistant United States attorney and Computer Hacking and Intellectual Property Section attorney gives him first-hand understanding of federal agencies that allows him to swiftly navigate the system, partner with investigators and find creative solutions for his clients. As a federal cybercrime prosecutor, Aravind investigated and prosecuted a broad array of cybercrime cases, including hacking, phishing, trade secrets theft, click fraud, cyber threats, and identity theft. Aravind also led the cybercrime outreach program, where he worked with members of the Department of Justice, state and federal regulators, law enforcement and other organizations on cybersecurity and related privacy issues. During his time as federal prosecutor in the Complex Crimes Unit, he also investigated and prosecuted a wide array of white-collar crimes, including investment schemes, corporate fraud and embezzlement, securities fraud, tax evasion and the nation’s largest bank failure.

In June 2018, medical laboratory LabMD obtained the first-ever court decision overturning a Federal Trade Commission (FTC) cybersecurity enforcement action. (The team directing that effort – led by Doug Meal and Michelle Visser – joined Orrick in January 2019). There, the Eleventh Circuit held that an FTC cease-and-desist order imposing injunctive relief requiring LabMD to implement “reasonable” data security was impermissibly vague. In the wake of LabMD, the FTC’s new Chairman, Joseph Simons, stated that he was “very nervous” that the agency lacked the remedial authority it needed to deter allegedly insufficient data security practices and that, among other things, the FTC was exploring whether it has additional untapped authority it could use in this space. In this regard, Chairman Simons and Commissioner Rebecca Kelly Slaughter announced that the FTC is examining whether it can “further maximize its enforcement reach, in all areas, through strategic use of additional remedies” such as “monetary relief.” END_OF_DOCUMENT_TOKEN_TO_BE_REPLACED

A recent decision from the Supreme Court of Illinois heightens the risks faced by companies collecting biometric information by holding that an individual who is the subject of a violation of Illinois’ Biometric Information Privacy Act—but who suffered no separate harm from the violation—is an “aggrieved party” with a cause of action under the statute. Rosenbach v. Six Flags Entertainment Corp., No. 123186 (Ill. Jan. 25, 2019). This decision will only further embolden plaintiffs’ lawyers to bring biometric privacy suits, and the risk to companies collecting biometric information will likely increase as newly enacted and proposed legislation comes into effect. In this post, we discuss what happened, what is on the horizon, and some steps to consider. END_OF_DOCUMENT_TOKEN_TO_BE_REPLACED

The California Consumer Privacy Act of 2018 (the “CCPA” or the “Act”), which we reported on here and here continues to make headlines as the California legislature fast-tracked a “clean up” bill to amend the CCPA before the end of the 2018 legislative session. In a flurry of legislative activity, the amendment bill (“SB 1121” or the “Amendment”) was revised at least twice in the last week prior to its passage late in the evening on August 31, just hours before the legislative session came to a close. The Amendment now awaits the governor’s signature.

Although many were hoping for substantial clarification on many of the Act’s provisions, the Amendment focuses primarily on cleaning up the text of the hastily-passed CCPA, and falls far short of addressing many of the more substantive questions raised by companies and industry advocates as to the Act’s applicability and implementation. END_OF_DOCUMENT_TOKEN_TO_BE_REPLACED

The recently-enacted California Consumer Privacy Act of 2018 is a game-changer in a number of respects.  The Act imports European GDPR-style rights around data ownership, transparency, and control.  It also contains features that are new to the American privacy landscape, including “pay-for-privacy” (i.e., financial incentives for the collection, sale, and even deletion of personal information) and “anti-discrimination” (i.e., prohibition of different pricing or service-levels to consumers who exercise privacy rights, unless such differentials are “reasonably related to the value provided to the consumer of the consumer’s data”).  Privacy teams will be hard at work assessing and implementing compliance in advance of the January 1, 2020 effective date. END_OF_DOCUMENT_TOKEN_TO_BE_REPLACED

The Clarifying Lawful Overseas Use of Data (“CLOUD”) Act was enacted into law on March 23, 2018. The Act provides that U.S. law-enforcement orders issued under the Stored Communications Act (SCA) may reach certain data located in other countries – a key question in United States v. Microsoft Corporation, No. 17-2, a case argued before the Supreme Court on February 27.[1] Both the government and Microsoft recently agreed that the closely watched case is now moot following the CLOUD Act. END_OF_DOCUMENT_TOKEN_TO_BE_REPLACED

Cybersecurity continues to be “top-of-mind” for the Security and Exchange Commission (SEC).  That point couldn’t be made more clear than in comments and remarks made during the annual “SEC Speaks” conference in Washington, D.C. on February 23 and 24.  Read more for a full summary of the conference, including the SEC’s discussion of cybersecurity-related risk and incident disclosures, the Enforcement division’s formation of a Cyber Unit in the fall of 2017, and the SEC’s increased emphasis on the need for insider trading policies that address the impact of cyber events.

A recent skirmish about standing in data breach class actions (this time in the Eighth Circuit), involving securities and brokerage firm Scottrade, suggests that, even if plaintiffs win that limited question, there are other key battles that can win the war for defendants.  As we reported with Neiman Marcus, P.F. Chang’s, Nationwide, and Barnes & Noble, the Eighth Circuit’s decision in Kuhn v. Scottrade offers important proactive steps that organizations should consider taking that can mitigate post-breach litigation exposure.  END_OF_DOCUMENT_TOKEN_TO_BE_REPLACED

This week, a high profile plaintiffs’ firm (Edelson) stated that “if done right,” the data breach class actions against Equifax should yield more than $1 billion in cash going directly to more than 143 million consumers (i.e., roughly $7 per person).

Part of the answer revolves around the increasingly debated role and importance of “consumer harm” in resolving data breach disputes. END_OF_DOCUMENT_TOKEN_TO_BE_REPLACED

In the latest sign that data breach class actions are here to stay—and, indeed, growing—the D.C. Circuit resuscitated claims against health insurer CareFirst BlueCross and Blue Shield, following a 2015 breach that compromised member names, dates of birth, email addresses, and subscriber identification numbers of approximately 1.1 million individuals.  The decision aligns the second most powerful federal appellate court in the nation with pre-Spokeo decisions in Neiman Marcus and P.F. Chang and post-Spokeo decisions in other circuits (Third, Seventh, and Eleventh).  In short, an increased risk of identity theft constitutes an imminent injury-in-fact, and the risk of future injury is substantial enough to support Article III standing.

The D.C. Circuit’s holding is an important development.  First, the D.C. Circuit went beyond credit card numbers and social security numbers to expand the scope of data types that create a risk to individuals (i.e., names, birthdates, emails, and health insurance subscriber ID numbers).  Second, the decision makes clear that organizations should carefully consider the interplay between encryption (plus other technical data protection measures) and “risk of harm” exceptions to notification, including exceptions that may be available under HIPAA and GLBA statutory regimes. END_OF_DOCUMENT_TOKEN_TO_BE_REPLACED

Today, Orrick announced the launch of our automated General Data Protection Regulation (GDPR) Readiness Assessment Tool, which makes the EU’s new, complex, data privacy law, the GDPR, more accessible. The free tool is available to all organizations and allows businesses to stress test their compliance against the upcoming GDPR. It segments the GDPR into 14 workable themes and guides the user through a series of dynamic questions relating to each theme. Upon completion of the assessment, the tool provides a complimentary tailored report summarizing the likely key impacts of the GDPR for an organization. END_OF_DOCUMENT_TOKEN_TO_BE_REPLACED

Fetch Tweets: Sorry, that page does not exist. Code: 34