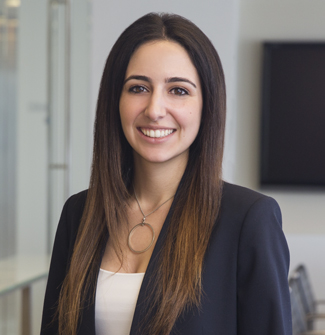 She regularly represents technology companies, financial institutions, sports associations and manufacturers across the country. Natalie has advised some of the largest and most well-known companies in the world in complex high-stakes matters, including Microsoft, Twitter, Bank of America, Johnson & Johnson and the NCAA.

Natalie is a true client advocate who appreciates a client’s needs and reputational concerns involved in high-stakes litigation. Her areas of focus include technology litigation, mass torts and product liability, complex breach of contract, and consumer class actions including Proposition 65 and the Consumer Legal Remedies Act. She has helped numerous clients by developing innovative and effective strategies to resolve cases. Natalie served as first chair in an arbitration where she successfully defended Microsoft in a matter involving the permanent suspension of a Skype user claiming millions in damages. Additionally, Natalie recently obtained a favorable result for Microsoft in a separate arbitration where the team creatively set forth a defense under Section 230 of the Communications Decency Act.

Natalie’s representation of clients in the mass tort and product liability space involves clients with significant potential damages, multiple jurisdictions and plaintiffs, and high risk to critical product lines. In most of these cases, in addition to serving as a key trial team player, Natalie serves as the point person for expert development and discovery. With her experience, she has created highly efficient and effective methods to analyze and synthesize the key facts in complex matters and use expert opinions and testimony to develop compelling stories for her clients in the courtroom. Most recently, Natalie was part of a trial team that obtained a complete defense verdict for the NCAA in a case brought by a former University of Oregon football player who was seeking $100 million in punitive damages.

Other notable engagements include:

Natalie is also active in pro bono matters including representing victims of domestic violence and assisting young immigrant children who are seeking asylum to obtain legal status in the United States.

On November 26, 2014, the Delaware Court of Chancery denied a motion to dismiss a complaint challenging a going-private transaction where the company’s CEO, Chairman and 17.5% stockholder was leading the buyout group.  In his decision in the case, In Re Zhongpin Inc. Stockholders Litigation, Vice Chancellor Noble concluded that the complaint pled sufficient facts to raise an inference that the CEO, Xianfu Zhu, was a controlling stockholder, and as a result, the deferential business judgment rule standard of review did not apply.  Instead, the far more exacting entire fairness standard governed, which in turn led the Court to deny the motion.

This is the fourth recent decision to address when a less-than 50% stockholder can be considered a controller, an issue that determines whether the alleged controller owes fiduciary duties to other stockholders and the standard of review the Court will apply in evaluating the challenged transaction.  The decision therefore provides important guidance for directors and their advisors in structuring transactions involving large stockholders.