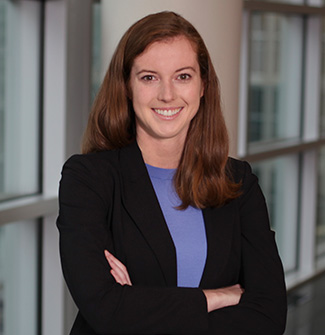 Her practice focuses on the representation of corporations, major financial institutions, and individuals in securities and complex commercial actions, regulatory investigations, and internal investigations.   Aoife has also successfully represented a Bay Area biotech company in one of the first Defend Trade Secrets Act cases in the Northern District of California.

Aoife is dedicated to providing pro bono services, including through the International Refugee Assistance Project.  While a law student, Aoife served as Managing Editor of the Journal of International Law & Politics at New York University School of Law.

A federal district court judge in Chicago sentenced Robert O’Rourke, a former employee of iron bar manufacturer Dura-Bar, to one year and one day in prison last week for stealing trade secrets.  Well, not quite.  O’Rourke was convicted on February 25 of seven counts of stealing and attempting to steal trade secrets, but moved for a new trial.  In her October 11 order, Judge Andrea Wood denied the motion, holding that the trial evidence demonstrated O’Rourke’s intent to steal and use trade secrets—even if some of the proprietary information stolen did not actually constitute a trade secret. END_OF_DOCUMENT_TOKEN_TO_BE_REPLACED

Judge Vince Chhabria of the Northern District of California handed down a strongly worded order denying a motion to seal alleged trade secret information, and sanctioning counsel for defendant for the frivolous request. The order is a stern reminder to the sanctioned attorneys and to trade secret litigants in federal court generally that federal litigation is traditionally a public process, and that parties seeking to remove documents from the public’s access often face an uphill battle in order to do so. END_OF_DOCUMENT_TOKEN_TO_BE_REPLACED

Plaintiffs in New York state trade secret actions face a new limitation on their damages claims, according to a May 3, 2018 decision from the state’s Court of Appeals.  The 4-3 opinion settles a split in New York state case law.  Going forward, compensatory damages for trade secrets misappropriation are limited to the amount actually lost by the plaintiff, and cannot extend to the “hypothetical” amount saved by the alleged infringer on research or development. END_OF_DOCUMENT_TOKEN_TO_BE_REPLACED

Does the government have a duty to identify the trade secrets at issue when charging a defendant with trade secret theft under the Economic Espionage Act? Our blog analyzes a recent case concerning this issue. #tradesecrets #China blogs.orrick.com/trade-secrets-…

In a Blockbuster Economic Espionage Act Prosecution, an Attempt by the Government to Hide the Ball?

Indirect competition was enough to enforce a #noncompete against a former CEO in this recent decision. Learn more from our latest blog post. bit.ly/39j09Yq

Orrick's Rich Martinelli recently spoke with @CDR_Magazine to offer his insights on the past year in #IP law and to discuss key cases to watch out for in 2020, including those involving #AI. bit.ly/2M0H6YT Retweeted by Trade Secrets Watch