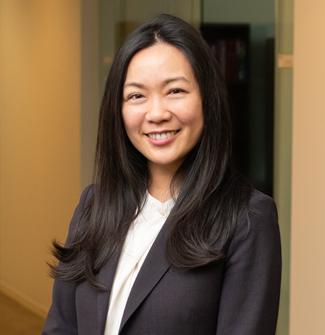 Companies face risks and problems that often don't fit neatly into a single area of the law. Clients in crisis engage Caroline to manage legal risks in their response and defend them in high-stakes, complex investigations and litigation because of her commitment to her clients and her ability to draw from her experience in IP, criminal, and commercial disputes to craft creative and aggressive strategies to help clients manage reputation and risk, all while furthering their business objectives.

Caroline leads the Boston office and specializes in intellectual property litigation, with a particular emphasis on disputes involving trade secret misappropriation and trademark and trade dress infringement claims. She has handled multiple trials before judges and juries, in state and federal court, and before the International Trade Commission (ITC). In this space, she has represented and defended companies across the life sciences, pharmaceutical, materials, manufacturing, tech, and financial sectors.

Caroline currently co-chairs the IP Litigation Committee of the Boston Bar Association's Intellectual Property Law Section. In 2017, Caroline was named an Up & Coming Lawyer by Massachusetts Lawyers Weekly, and has been named a Rising Star by Super Lawyers in 2016 - 2020. She currently serves as an ambassador in the Move the Needle initiative, a trailblazing collaboration between Orrick, Diversity Lab, leading GCs, and four other law firms to advance diversity and inclusion in the legal profession through ambitious goals and bold experimentation. Caroline also maintains an active pro bono practice, currently representing children and refugees in asylum proceedings in conjunction with Kids In Need of Defense (KIND) and the Political Asylum / Immigration Representation (PAIR) Project. She has drafted amicus briefs in cases pending before the U.S. Supreme Court and U.S. Circuit Courts of Appeals in the areas of federal sentencing guidelines, reproductive rights, and political law.

The U.S. Supreme Court recently resolved a circuit split regarding the federal Computer Fraud and Abuse Act (CFAA), specifically weighing in on the “exceeds authorized access” provision of the statute.  The CFAA subjects to criminal liability anyone who “intentionally accesses a computer without authorization or exceeds authorized access.” END_OF_DOCUMENT_TOKEN_TO_BE_REPLACED

A preliminary injunction motion recently filed in the Eastern District of Virginia paints a fascinating story of alleged trade secret theft by a direct competitor in the ultra-competitive field of gas turbines, and the fallout that ensued. END_OF_DOCUMENT_TOKEN_TO_BE_REPLACED

Last week, we examined the recent Third Circuit decision in Advanced Fluid Systems, which held that a trade secrets plaintiff did not need to be an owner or a licensee of the alleged trade secrets to bring a state law misappropriation claim under Pennsylvania’s UTSA—all that was required was that the plaintiff had “lawful possession” of the trade secrets. In so holding, the Third Circuit added to the weight of the Fourth Circuit’s similar analysis of Maryland’s UTSA in DTM Research, L.L.C. v. AT&T Corp., 245 F.3d 327 (4th Cir. 2001).

END_OF_DOCUMENT_TOKEN_TO_BE_REPLACED

An ongoing, headline-grabbing trade secret theft prosecution against a Chinese spy is also quietly presenting a, say, disquieting attempt by prosecutors to stretch the law on what it is required to plead and prove.  On the civil side, when a plaintiff sues for trade secret theft, there’s almost always a hotly contested point of proof on whether the alleged stolen material is really a trade secret.  It’s well-established, though, that when the government charges a defendant criminally with the inchoate forms of trade secret theft—attempt or conspiracy being the two spelled out under the Economic Espionage Act—the government has no burden to prove that the underlying information was actually a trade secret.  (Loyal readers will recall our recent post on United States v. O’Rourke, where the defendant tried to argue otherwise at sentencing.)  Now, in a brief filed just last week, the government seems to be taking this one step further and arguing that it has no duty even to identify the trade secrets at issue. END_OF_DOCUMENT_TOKEN_TO_BE_REPLACED