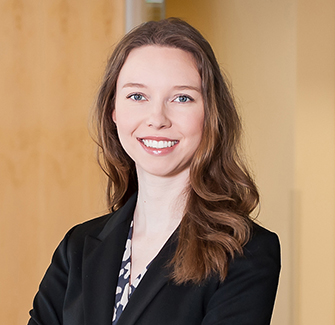 Christine is recognized by her clients for her unique ability to distill complicated concepts into powerful and persuasive narratives that put their interests front and center.

She has experience working on multi-jurisdictional litigations and regulatory investigations that involve a complex combination of securities law, shareholder litigation, and regulatory compliance. Her experience also includes litigating matters with the Washington Attorney General's office. Christine dives into new cases and areas of law fearlessly and has a talent for quickly getting up to speed and crafting strategies to stop the opposition in its tracks.

Christine has a strong interest in the intersection of financial litigation and regulation and emerging fintech, and she has written articles on the intersection of securities law and cryptocurrency, which are featured below. As technology advances beyond the traditional language of the law, Christine understands that clients need a cohesive strategy to move their business forward while avoiding legal pitfalls.

On October 12, 2017, the United States Securities and Exchange Commission’s Investor Advisory Committee met to discuss Blockchain technology and its impact on the securities industry. While Blockchain is best known as the decentralized accounting system that make transactions in Bitcoin and other cryptocurrencies possible, the panel of industry professionals and academics emphasized its potential to transform “mainstream” financial recordkeeping in a way that makes executing and recording all financial transactions more secure and efficient.

SEC Chairman Jay Clayton, who oversaw the proceedings, explained that the Commission seeks to explore the ways in which Blockchain can promote robust and competitive markets, while ensuring that investors are protected and federal securities laws are applied to transactions in cryptocurrencies made possible by the technology.

END_OF_DOCUMENT_TOKEN_TO_BE_REPLACED

On June 26, 2017, the U.S. Supreme Court issued a decision that will have a significant effect on securities class action litigation, changing the strategic calculus for both institutional plaintiffs and defendants. In California Public Employees’ Retirement System v. Anz Securities, Inc., No. 16-373, 582 U.S. ___ (2017) , the Court held that American Pipe tolling does not apply to the 3-year statute of repose for private damage claims under the Securities Act of 1933.  Thus, the filing of a class action complaint under Section 11 of the Securities Act of 1933 does not toll the three-year statute of repose for individual claims that may be brought by putative class members who later decide to opt out of a class-wide settlement.

CalPERS arose out of two public securities offerings issued by Lehman Brothers Holdings in 2007 and 2008.  In September 2008, with Lehman in bankruptcy, a Section 11 class action was filed against Anz Securities and other underwriters to the offerings, alleging that the registration statements included material misstatements or omissions.  The class action complaint was consolidated with other securities suits against Lehman into a single multidistrict class action in the Southern District of New York.  CalPERS, an unnamed member of the putative class, subsequently filed a separate complaint alleging identical causes of action against the respondents in the Northern District of California in February 2011—more than three years after the offerings closed.  CalPERS’ individual suit was transferred to the Southern District of New York and consolidated with the multidistrict litigation.  CalPERS opted out of the class only after the class action reached a settlement.

END_OF_DOCUMENT_TOKEN_TO_BE_REPLACED

This week, the Supreme Court heard argument regarding whether the SEC’s actions to disgorge ill-gotten gains are subject to a five-year statute of limitations for “any civil fine, penalty, or forfeiture.”

The appeal stems from an SEC action alleging that between 1995 and 2006, Charles Kokesh, a New Mexico-based investment adviser, misappropriated a staggering $35 million from two investment advisory companies that he owned and controlled, squandering the money of tens of thousands of small investors. While Kokesh moved into a gated mansion and bought himself a personal polo court (complete with a stable of 50 horses), he allegedly concealed his massive ill-gotten earnings by distributing false proxy statements to investors and filing dozens of false reports with the Securities and Exchange Commission.

In 2009, the SEC brought a civil enforcement action against Kokesh in the District of New Mexico alleging violations of the Securities Exchange Act of 1934, the Investment Advisers Act of 1940, and the Investment Company Act of 1940. The jury found violations of all three acts, and the district court ordered Kokesh to disgorge the $35 million he misappropriated (plus interest) and pay a $2.4 million civil monetary penalty for the “egregious” frauds he committed within the prior five years.  While the district court ordered disgorgement of all of Kokesh’s ill-gotten gains since 1995, the civil monetary penalty it imposed was constrained by the five-year statute of limitations found in 28 U.S.C. § 2462, which applies to claims throughout the U.S. Code for “any civil fine, penalty, or forfeiture.” END_OF_DOCUMENT_TOKEN_TO_BE_REPLACED

A divided panel of the Seventh Circuit recently held that the Securities Litigation Uniform Standards Act (“SLUSA”) requires any covered class action that “could have been pursued under federal securities law” to be brought in federal court.  The plaintiff maintained an investment account at LaSalle Bank, which was later acquired by Bank of America.  Each night, LaSalle invested (“swept”) the account’s balance into a mutual fund approved by the plaintiff.  Without the plaintiff’s knowledge, LaSalle also allegedly pocketed the fees that some of the mutual funds paid each time a balance was transferred.  When the plaintiff found out, he brought a class action in state court, arguing that LaSalle had breached its contractual and fiduciary duties to its customers by secretly paying itself fees generated by their accounts.

LaSalle and Bank of America successfully argued before the district court that SLUSA required removal of the case to federal court. SLUSA authorizes defendants to demand removal of any class action with at least fifty members that alleges “a misrepresentation or omission of a material fact in connection with the purchase or sale of a covered security.”  Congress drafted SLUSA to force securities class actions out of state courts and into federal courts, where plaintiffs must clear higher pleading hurdles.

END_OF_DOCUMENT_TOKEN_TO_BE_REPLACED

A recent petition for certiorari filed in the United States Supreme Court asks the Court to clarify what an aggrieved investor must plead to state a claim for securities fraud under the Securities and Exchange Act of 1934 (the “Exchange Act”).  The petition focuses on the “loss causation” element, which requires plaintiffs to prove a direct causal link between the alleged fraud and the loss in value for which they seek to recover.  In a typical fraud in-the-market case, plaintiffs allege loss causation by showing that they bought the defendant’s securities at prices artificially inflated by fraud, and then had those securities lose value after a “corrective disclosure” revealed the fraud to the public.  If the Supreme Court decides to grant certiorari, it will have the opportunity to lift certain barriers to pleading loss causation in some jurisdictions.

Petitioners, three New England funds (“Funds”) that own stock in Health Management Associates, Inc. (“HMA”), seek to reverse the Eleventh Circuit’s decision that they failed to establish loss causation as a matter of law. The Funds alleged that HMA’s stock price fell precipitously following two disclosures to the market: (1) an announcement that the government had begun an investigation into HMA for fraud, and (2) an analyst report publicizing a whistleblower case filed by a former employee against HMA three months earlier.  A panel for the Eleventh Circuit upheld the lower court’s decision that neither event could form the basis of a securities fraud claim.  First, the panel held that the announcement of a government investigation could not raise an inference of loss causation at the pleading stage because there had been no finding of “actual wrongdoing.”  Second, the panel held that the analyst report was not a “corrective disclosure” because it reported on a publicly-filed case that, although it hadn’t been reported on until then, was already disclosed to the market. END_OF_DOCUMENT_TOKEN_TO_BE_REPLACED

END_OF_DOCUMENT_TOKEN_TO_BE_REPLACED

On Thursday, May 19, 2016, the U.S. Attorney’s Office for the Southern District of New York announced the arrest of renowned sports bettor William “Billy” T. Walters on an alleged years-long insider trading scheme conducted with his friend and business partner, Thomas C. Davis.  According to the indictment, from 2008 to 2014, Mr. Walters executed a series of profitable stock trades in Dean Foods and Darden Restaurants based on inside information repeatedly and systematically provided to him by Mr. Davis.  The U.S. Attorney’s Office alleges that these trades netted Mr. Walters over $40 million and charged him with conspiracy, securities fraud, and wire fraud.