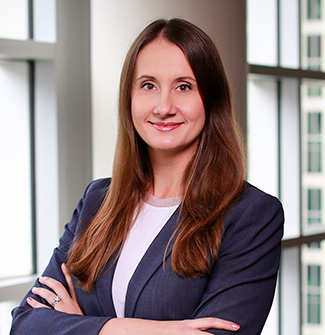 Alex Stathopoulos, a Partner in the San Francisco employment group, defends employers in complex wage and hour class actions and single plaintiff cases, and provides creative and practical counseling on a wide range of employment issues including new and developing areas of the law.

Legal 500 has recognized Alex as a "stand-out" attorney "who communicates quickly, confidently, and efficiently" and noted that she is "prepared, firm, and patient in depositions, with opposing counsel and with witnesses, and thinks very well on her feet." Alex is a member of the Executive Committee for the California Lawyers Association (CLA) Labor and Employment Section and is an Editor-in-Chief of the CLA Labor & Employment Law Review. Alex also serves on the Executive Committee for the Bar Association of San Francisco (BASF) Labor and Employment Law Section.

Her counseling practice focuses on providing advice to management, designing appropriate workplace policies and procedures, and offering creative and practical solutions to address a wide range of employment issues including new and developing areas of the law.

Orrick’s Employment Law and Litigation group was recently named Labor & Employment Department of the Year in California for the fourth consecutive year by The Recorder, the premier source for legal news, in recognition of their significant wins on behalf of leading multinational companies on today’s most complex and challenging employment law matters.

As of March 30, 2020, Maryland and Virginia became the latest states to issue stay-at-home orders to combat the spread of Coronavirus (COVID-19). The directive to keep people at home began just two weeks ago in California and has now been adopted by more than half the states. END_OF_DOCUMENT_TOKEN_TO_BE_REPLACED

On Friday, January 10, 2020, Chief United States District Judge Kimberly Mueller of the Eastern District of California heard oral argument on plaintiffs’ motion for preliminary injunction.  As a result of clarifications made at the oral argument, the temporary restraining order (TRO) has been modified from its broad applicability to only enjoin defendants from enforcing AB 51 to the extent it applies to arbitration agreements covered by the FAA.  The revised TRO will remain in effect until January 31, 2020, at which point we might have a ruling on the preliminary injunction.  Judge Mueller concluded the oral argument by providing both parties the opportunity to submit supplemental briefing on two issues:  (1)  jurisdiction/standing; and (2)  severability.  As to the latter issue, Judge Mueller indicated she would accept specific proposals related to how the arbitration-related sections of the statute might be severed if she decided to grant the injunction on FAA preemption grounds. END_OF_DOCUMENT_TOKEN_TO_BE_REPLACED

On May 2, 2019, the Ninth Circuit in Vazquez v. Jan-Pro Franchising Int’l, Inc. held that the California Supreme Court’s 2018 decision in Dynamex Operations West v. Superior Court applied retroactively. Dynamex adopted the “ABC” test for independent contractor classification for claims arising under California’s Wage Orders. For those claims, an employer must show that all three prongs of the ABC test are met to justify independent contractor status. For information on Dynamex’s adoption of the ABC test, read our prior coverage here. END_OF_DOCUMENT_TOKEN_TO_BE_REPLACED

In a break from federal law, the California Supreme Court clarified in Alvarado v. Dart Container Corp. the proper formula for calculating flat-rate bonuses into overtime pay under California law.  The Court adopted the Plaintiff’s position and held that, for purposes of calculating the per-hour value of a flat rate bonus, the divisor should be the number of nonovertime hours the employee worked in the pay period rather than all hours worked during the pay period.  END_OF_DOCUMENT_TOKEN_TO_BE_REPLACED

On Friday, June 16, 2017, the United States Department of Justice (DOJ) filed an amicus brief reflecting a change of heart when it comes to the enforceability of class waivers in arbitration agreements.  In an unprecedented move, President Trump’s acting solicitor general, Jeffrey B. Wall, said his office had “reconsidered the issue and has reached the opposite conclusion” as the Obama administration in a set of consolidated cases currently before the U.S. Supreme Court, NLRB v. Murphy Oil USA Inc. (Docket Nos. 16-285, 16-300, and 16-307).

END_OF_DOCUMENT_TOKEN_TO_BE_REPLACED

For anyone who missed it, on Monday, March 14th the “Opportunity to Work Ordinance” (the “Ordinance”) went into effect in San Jose.  The Ordinance, which was approved by voters on November 8, 2016, requires employers to offer additional hours to existing part-time employees before hiring externally, either directly or through a temporary staffing agency. Employers must offer the additional hours to employees who have the skills and experience to perform the work.  Whether or not an existing employee has the requisite skill and experience is a determination left to the employer – modified only by the requirement that the employer act in good faith and with reasonable judgment.  Further, an employer need not offer an existing employee additional hours if doing so would require the employer to compensate the existing employee at time-and-a-half or any other premium rate under the law or a collective bargaining agreement.  END_OF_DOCUMENT_TOKEN_TO_BE_REPLACED

On September 25, 2016, California Governor Jerry Brown signed S.B. 1241 into law, prohibiting employers doing business in the Golden State from requiring California employees, as a condition of employment, to agree to non-California choice-of-law or venue provisions for claims arising in California, either in litigation or arbitration.  Such provisions are frequently found in employment, arbitration, or non-compete agreements.  The new law will be codified as California Labor Code section 925, and will apply to contracts entered into, modified, or extended on or after January 1, 2017.

END_OF_DOCUMENT_TOKEN_TO_BE_REPLACED

On October 23, 2015, in a suit filed by Bio-Rad’s former general counsel Sanford Wadler, the United States District Court for the Northern District of California issued a decision granting in part and denying in part Defendants’ motion to dismiss in Wadler v. Bio-Rad Labs, Inc. (No. 15-CV-02356-JCS, 2015 WL 6438670 (N.D. Cal. Oct. 23, 2015), holding, among other things, that corporate directors may be held personally liable for retaliating against a whistleblower under both the Sarbanes-Oxley Act of 2002 (SOX) and the Dodd-Frank Wall Street Reform and Consumer Protection Act of 2010 (Dodd-Frank).