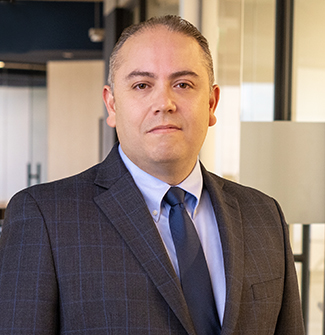 Robert is a technology litigator and member of Orrick’s Cyber, Privacy & Data Innovation practice.  Robert's practice focuses on software and security, with an emphasis on emerging internet law and digital crimes issues.  Robert has helped establish landmark precedent under the Copyright Act, the Computer Fraud and Abuse Act, and Digital Millennium Copyright Act, and he has a wealth of experience litigating patents in the software, networking, and security domains.

Robert is committed to improving diversity in the legal profession. He co-chairs Orrick's Silicon Valley Diversity Committee and is one of the firm-wide facilitators for Orrick’s Latinx Affinity Group.  Robert is also committed to pro bono work.  He received Orrick's Pro Bono Award in 2019 and the Legal Aid Association of California's 2015 Family Law Pro Bono Award.  Robert is the Secretary and a member the board of directors for the San Mateo County Legal Aid Society.

Robert served as a law clerk to U.S. District Judge Oliver W. Wanger in the Eastern District of California prior to commencing private practice.

The right to a jury trial is one of the most important features of modern trade secrets law.  But as a recently issued Order from the Texas Fourth Court of Appeals (“Court of Appeals”) illustrates, the jury trial right is only as good as the jury instructions that execute that right.   END_OF_DOCUMENT_TOKEN_TO_BE_REPLACED

We have discussed before the importance of maintaining internal policies and procedures to protect the security and integrity of cloud-based repositories. A recent case in the U.S. District Court for the District of Maryland illustrates that this continues to be an important issue—particularly for companies who store their crown jewels on the cloud.

END_OF_DOCUMENT_TOKEN_TO_BE_REPLACED

What happens when trade secret protections collide with laws granting public access to government records? This question took center stage in a recent case involving the Seattle Police Department (“SPD”). A federal district court enjoined the SPD from disclosing a software vendor’s allegedly trade secret information in response to a reporter’s public records act request.  Besides serving as a reminder of the precautions that companies should take when disclosing intellectual property to public agencies, the case also raises interesting questions and strategic considerations. END_OF_DOCUMENT_TOKEN_TO_BE_REPLACED

Criminal trade secrets prosecutions tend to make national headlines, and for good reason. With fact patterns that often involve international intrigue, high technology, and millions of dollars in play, these cases can read like a James Bond flick. But while astronomical monetary figures make good copy, they also present vexing legal questions that can have drastic impacts on sentencing. END_OF_DOCUMENT_TOKEN_TO_BE_REPLACED

On August 22, 2014, the Texas Supreme Court ordered oral argument in In re: Magnum Hunter Resources Corp., a case concerning the discoverability of third-party trade secrets documents in civil cases. When should such documents be produced? And who gets to see them?

A simple summary of the facts of Magnum Hunter are as follows:

Party A hires Law Firm to help it negotiate a contract with Party B regarding an oil and natural gas venture. Party A and Party B ultimately reach an agreement on the venture and enter into a contract that says that Party B will provide to Party A all reports related to the venture upon request, provided that Party A agrees to treat such reports as confidential information.

END_OF_DOCUMENT_TOKEN_TO_BE_REPLACED

It’s been a hot year in the trade secrets field, with some huge verdicts and settlements, a renewed spotlight on cyberattacks, and an unusual flurry of trade secrets legislation.  Trade Secrets Watch’s 2013 Year-in-Review highlights the notable trade secrets activity from the past year. END_OF_DOCUMENT_TOKEN_TO_BE_REPLACED

On June 20, 2013, Formula One’s internal judicial system will convene in Paris to decide whether Mercedes and Pirelli violated the racing body’s governing agreements by conducting secretive tire testing last month. Mercedes and Pirelli claim the safety-related tests were authorized by the contract establishing Pirelli as Formula One’s exclusive tire supplier, but Mercedes’ F1 rivals claim the tests provided Mercedes with an unfair competitive advantage. This case provides some insight into the development and importance of trade secrets in an industry where fierce competition, rapidly-changing technology, and billions at stake make trade secret protection vital but often difficult.

Despite F1 teams’ shared interests in controlling costs, maximizing revenue, and promoting a common culture, Formula One is composed of a group of competing businesses out to win races, sponsorships, and prize money. So it’s no surprise that many teams push the envelope of what is permissible under Formula One’s governing documents in pursuit of speed, cash, and glory. As Le Mans legend Carroll Smith famously stated: “In any given racing series I will not start the cheating. If someone else starts it, I will appeal to them and to the officials to stop it. If my efforts do not succeed, then I’ll show them how it is done.” END_OF_DOCUMENT_TOKEN_TO_BE_REPLACED