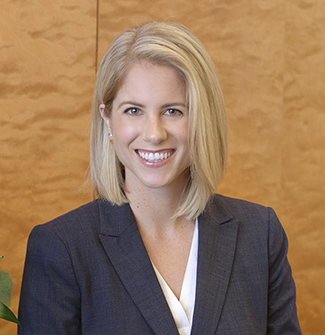 Katie Briscoe is an associate in Orrick’s Employment Law Group in the Sacramento office.

Katie Briscoe is a Senior Associate in Orrick’s Employment Law Group. Katie collaborates with employers to resolve challenging litigation and avoid risky compliance issues. She defends employers against PAGA, class, multi-plaintiff, and single plaintiff actions involving a variety of claims ranging from complex wage and hour disputes to contentious discrimination and harassment claims. Katie has jury trial experience and practices before a variety of forums, including state and federal trial courts, the Ninth Circuit Court of Appeals, and private arbitration and mediation. She understands the challenges that employers face and helps them to navigate ever-changing state, federal, and local laws. Katie has deep expertise litigating and advising on wage and hour issues; exempt/non-exempt classification; discrimination, harassment, and retaliation; arbitration agreements; independent contractor classification; business expense reimbursement; compensation; Section 17200, and more. She also works with clients to resolve employment disputes prior to litigation.

Katie earned her J.D. from the University of California, Davis School of Law, where she graduated Order of the Coif.

As states begin to reopen and employees return to the workplace, employers are faced with trying to protect workers and prevent the spread of COVID-19 in the workplace. Many employers are looking to temperature testing as a potential safeguard. Like many emerging safety measures, though, there are several considerations to weigh before implementing temperature testing: END_OF_DOCUMENT_TOKEN_TO_BE_REPLACED

Remember California’s new ban on mandatory workplace arbitration agreements? The Eastern District of California has put it on ice, granting a temporary restraining order against the ban’s enforcement. As a refresher, and as we wrote about here, on October 10, 2019, California Governor Gavin Newsom signed into law California’s latest afront on workplace arbitration—AB 51. Under AB 51, employers may not, “as a condition of employment, continued employment, or the receipt of any employment-related benefit, require an applicant or employee to waive any right, forum, or procedure” for FEHA and Labor Code claims. Violations of the new statute carry hefty consequences, including criminal penalties. Many employers see arbitration agreements as necessary to manage employment disputes and an outright ban on this efficient process strongly affects their bottom line. The ban was scheduled to go into effect on January 1, 2020, but the TRO put enforcement on hold for now. END_OF_DOCUMENT_TOKEN_TO_BE_REPLACED

In the age of smartphones, virtually everyone has a recording device at his or her fingertips—including employees. This can present challenges in the workplace. For example, smartphones and other technology enable employees to secretly (read: illegally) record business meetings, disciplinary discussions with HR, and interactions with other employees. Not only does this violate privacy rights and trust, it also risks disclosing confidential company or employee information. Fortunately, employers are not without a remedy. California’s privacy laws offer protection against illegal recordings by employees. END_OF_DOCUMENT_TOKEN_TO_BE_REPLACED

A California Court of Appeal recently issued an order in Ward v. Tilly’s, Inc. finding that certain on-call scheduling practices trigger “reporting time pay” requirements even when the employee does not actually come into the work site. END_OF_DOCUMENT_TOKEN_TO_BE_REPLACED

The Ninth Circuit recently sided with the Equal Employment Opportunity Commission (“EEOC”), holding that employers can’t require applicants to pay for follow-up post-offer medical exams.  Specifically, in EEOC v. BNSF Railway Company, No. 16-35457 (9th Cir. Aug. 29, 2018), the court affirmed that BNSF Railway Company (“BNSF”) violated the Americans with Disabilities Act (“ADA”) by conditioning the plaintiff’s job offer on his getting an MRI at his own expense.

END_OF_DOCUMENT_TOKEN_TO_BE_REPLACED

In the wake of #MeToo, California has enacted a new statute aimed to protect victims, witnesses, and former employers from claims of defamation for making complaints or communicating information about alleged sexual harassers to others.  On July 9, 2018, Governor Brown signed into law Assembly Bill 2770. The bill amends Civil Code section 47, which makes certain communications “privileged,” meaning those communications cannot be the basis of a defamation claim.

END_OF_DOCUMENT_TOKEN_TO_BE_REPLACED

In tandem with the growing #MeToo movement, sexual harassment appears to be top of mind for California legislators in 2018. In the wake of Harvey Weinstein, Bill Cosby and the like, California has been flooded with an unprecedented number of bills aimed at combatting sexual harassment.  The 20+ pending bills take on topics ranging from confidentiality provisions to increased mandatory harassment training.  Now more than ever, employers must pay heed to how sexual harassment issues are handled at their companies. Here are the highlights from the top 10 bills that – if passed – will most likely impact employers:

Senate Bill 820 would prohibit settlement agreement provisions that prevent the disclosure of facts related to claims of sexual assault, sexual harassment or sex discrimination cases. Otherwise known as the STAND (Stand Together Against Non-Disclosures) Act, the bill would apply to agreements entered into after January 1, 2019 and would create an exception where a complainant requests a nondisclosure provision (unless the defendant is a government agency or public official, in which case the exception would not be available). The STAND Act passed the Senate Judiciary Committee on May 1, 2018 with a vote of 5-1, and is now headed to a full vote in the Senate. Assembly Bill 3057 contains similar prohibitions, and is currently in the Assembly Appropriations Committee. END_OF_DOCUMENT_TOKEN_TO_BE_REPLACED

When we last checked in on AB 1209, the Gender Pay Gap Transparency Act, the proposed legislation was making its way through the California Senate. After making a few key amendments, the Senate passed the bill on September 7, 2017. The California Assembly approved the amendments on September 11, 2017, and now the fate of AB 1209 lies in the hands Governor Jerry Brown. END_OF_DOCUMENT_TOKEN_TO_BE_REPLACED